You may have seen the recent New York Times op-ed piece by Jane Gross entitled “How Medicare Fails the Elderly.”

Though today I intended to write a chipper little blog entry entitled Apple Cakes I Have Known and Loved, reading Gross’s important expose on what she calls “the dirty little secret of health care” — that Medicare does not pay for what most patients (and their families) need and want — reminded me that mid-life is not all soccer games, jack-o-lanterns and apple desserts and that the reason I started this blog was to explore the good, the bad and the ugly aspects of this unique life stage.

They call us the “sandwich generation” for a reason. 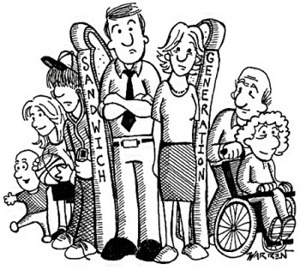 Whether you realize it or not, eventually you will have to deal with some aspect of caring for your aging parents.  And it may happen sooner than you expected.

Here’s an excerpt from a piece entitled Hero Sandwich that appeared in a previous incarnation of this blog:

On some level I always knew this day would come, though I hoped to avoid it. But now, staring me in the face is this: my mother, alone and destitute, has cancer. And it’s fallen to me, three thousand miles away, to support her, arranging for her treatment, housing, home health care support and emotional support. In the week since we’ve had the news, cancer has become an almost full-time job, piled on top of my responsibilities as a mother with a part-time job and a life full of commitments.

They say you don’t know what you don’t know. Little did I know that attempting to figure out her health care coverage would cause me to become unglued. Little did I know that every day, I would move one step forward and two steps back, yet still make time to bake birthday cakes and cupcakes for my two daughters, whose birthdays fell during Week One of cancer, and for whom I wanted to keep things as normal as possible. Now, facing insomnia after a particularly frustrating day, I worry that my youngest daughter, who has been suspiciously scratching her head for weeks, is harboring a nest of lice in her thick, red, curly hair. Lice (and cancer) is what happens when you’re busy making other plans.

My mother dreads the nights, but I dread the days. The endless to-do list that is not do-able at all because of incorrect information, insurance loopholes and the sheer overwhelmingness of it all. The constant phone calls. And somewhere, buried beneath all that is the emotional toll of the news on my mother, me, my kids. It sneaks up on me, but frankly, I don’t have time to deal with it.

I wrote that nearly two years ago, when I undertook the most difficult challenge of my life – navigating my mother from life to death.  This involved bringing her from Florida to Seattle, where I hoped she could receive cancer treatment, only to discover when she got here that it was too late. The move necessitated changing her Medicare Part “D” insurance (just for kicks, ask your parents to explain their Medicare Part D coverage. Want to really have fun? Ask them to explain the “donut hole.”), which required scores of phone calls to Medicare, as well as to her old and new supplemental insurance companies.  Though I was literally fighting for her life (she could not see a doctor until the insurance changes were finalized), each phone call was like something out of Kafka.

The person at the other end of the line (who would only provide a first name) claimed to know nothing about what had supposedly been done during the previous ten phone calls.  Attempts to trace those other first-name-only customer service representatives, who had promised to take care of things, were fruitless.

During many sleepless nights, I sought comfort from the New York Times blog “The New Old Age,” which was established by Jane Gross, and has continued under Times writer Paula Span. Thanks to them (who I came to think of as trusted older sisters), their guest bloggers, and the countless readers who wrote in with questions and also advice, I learned what questions I should ask and discovered many valuable resources I hadn’t known about.  Most importantly, I learned I wasn’t alone.

Jane Gross recently published A Bittersweet Season: Caring for our Aging Parents –and Ourselves, which is both her personal story of caring for her mother and an enlightening depiction of how Medicare really works.

Paula Span describes her 2009 book When the Time Comes: Families with Aging Parents Share Their Struggles and Solutions as “a support group in print.”

Even if you don’t think you need to yet, I urge you to talk to your parents about their financial situation, their wills and their insurance coverage (including long-term care insurance)   Make sure they have given someone power of attorney and have written directives for the disposition of their remains. Pay attention to the proposed Medicare-related changes in the ongoing health care debate.

Because when the time comes, it will be bittersweet, and you will want to be prepared.