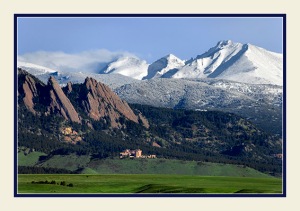 I’ve just returned from Boulder, Colorado, where I’ve gone to visit my dear friend L., whose son is in college there and who is recovering from the breakup of her 25-year marriage and preparing for her impending divorce.

I was last in Boulder 29 years ago, on a cross-country camping trip with my then-boyfriend.  We stopped in town to visit a friend and probably to take a shower.  I don’t remember much about the place except the smell of patchouli and the crunchy granola vibe.  The aroma and vibe are still there, especially on the Hill, the neighborhood around the University, but Boulder is decidedly more upscale. L. and I ate in several high-end restaurants, where there was nary an alfalfa sprout in sight. The most noticeable change is the preponderance of medical marijuana dispensaries, eyebrow -raising, given the youth and overall health of the population in a city that usually ranks among the top five healthiest in the U.S.

I've heard they even deliver

This has been a year for going back in time.  In the spring, I returned to Paris, where L. and I and her husband first met as students 31 years ago and in August, I returned to Washington, DC (first time back in 13 years), where I lived and worked prior to moving to Seattle to get married. Each of these retrospective trips has been cause for introspection – a bittersweet mélange of memories, roads not taken and the joy of rediscovering people and places that once were central to my life.

L and I have history together.  In my mind, she and her husband were the stable ones, marrying young while I remained single and uncertain until my mid-30s, achieving wealth while I still struggled to pay the bills, and successfully launching three kids and anticipating being youthful empty nesters, while I would remain tethered to soccer schedules and PTA meetings, long past menopause.

For all the times I sought refuge on L’s couch, it’s time for me to provide her emotional support.  We talk about fresh starts over gin-and-tonics. We take a cold, high-altitude hike. We do hot yoga. 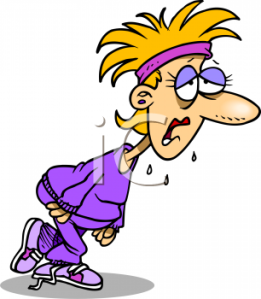 On Mt. Sanitas, somewhere around 7,000 feet, we are caught unprepared by a sleet shower that sends us running down the trail, L’s frostbitten hands clasped to her broken heart.  At hot yoga, while attempting to shift from one balancing pose to another, I slip in my own sweat and fall on my ass.  These inescapable metaphors for the newfound instability in L’s life are so obvious, they’re not even worth remarking on.   In the locker room at the yoga studio, another middle-aged divorcee and mother of a college-aged son regales us with her tales of reinvention, which involve neuro-feedback, hormone injections and pole dancing.  “I practiced some of my moves for my boyfriend.  He told me I need to take more classes,” she says wryly. 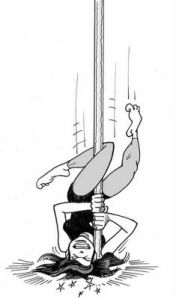 I introduce L to another friend, also named L, who lives in the area and is a few years ahead in the post-marital breakup recovery process.  L and L have so much in common. They both worked hard to have different lives than their mothers. They were supportive spouses. They read What to Expect When You Are Expecting and became doting mothers.  They were not expecting divorce.

We take their three sons out to breakfast. The boys, who give little thought to the future, eat beignets and biscuits and mounds of rich eggs.  Their mothers, who have learned you can’t be too careful, eat eggs scrambled with tofu and shredded carrots.  And I, somewhere in the middle, eat vegetarian Eggs Benedict.

Some things are timeless:  friends will always be there to pick you up when you stumble, college boys will always live in oblivious squalor.

There will always be a Marley to perform and an audience to appreciate the “don’t worry, be happy” mantra of reggae. 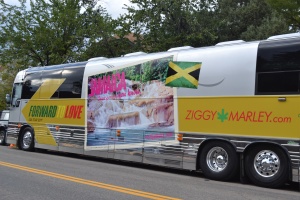 On my last afternoon in Boulder, L and I are taking a walk and we see a message written on a yellow, sticky note that someone felt compelled to place on an area map. 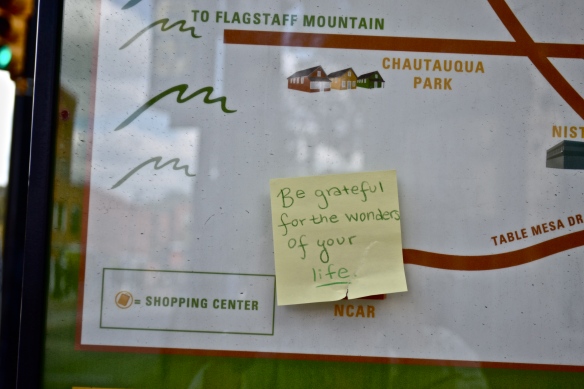 Be grateful for the wonders of your life

Permanent in its impermanence, this is a message we can’t ignore.