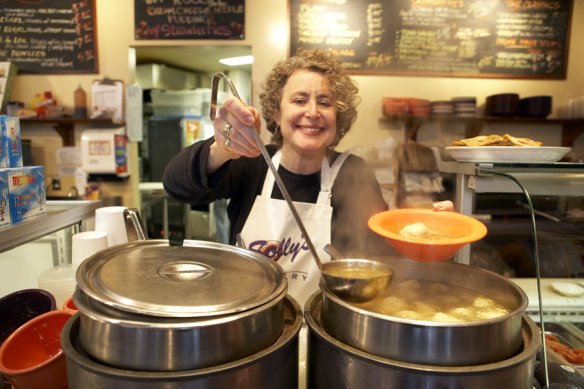 Today I decided to make Chicken Matzoh Ball soup for my friend S., who is suffering from pneumonia.

S., whose husband has been out of town for the past month, was planning to host a sleepover birthday party for her daughter this week, on the same night as the middle school open house for parents.  When I found out she had pneumonia, after consulting with our level-headed friend C., I convinced S., who didn’t want to disappoint her daughter, to reschedule the party. I gently suggested that it was important for her kids to understand she was vulnerable, that parents can’t always do everything. Then I offered to make her soup.

S., C. and I are part of a strong community of parents who routinely bail each other out.  We’ve picked up each other’s kids from school, made emergency deliveries of lice treatment equipment and have supported each other through the social traumas inflicted and experienced by girls. Cooking is my strong suit.  It is not among S.’s many talents.  What better way to repay years of friendship then with a steaming hot pot of “Jewish penicillin,” still something of a novelty in Seattle. 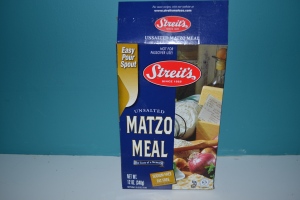 “While I’m at it, I’ll make two pots of chicken matzoh ball soup,” I reasoned.  Things have been cattywampus in our household too.  My husband Jeff is in Korea, the girls and I are coughing and sneezing and we’ve had evening commitments every night of the week.

I didn’t grow up eating or especially liking Chicken Matzoh Ball soup and do not have a family recipe, passed down from generation to generation, to rely on.  Instead, the recipe I use comes from Claudia Roden’s The Book of Jewish Food. Claudia Roden is one of my favorite cookbook authors and the revised version of her Book of Middle Eastern Food is probably my favorite cookbook of all time. It’s as much storybook as cookbook, and I have whiled away many happy hours lost in its pages.

I set the pots of chicken, turnips, leeks, onions and carrots on the stove at around 3:00. The goal was for the soup to be ready by 6:00 soccer practice, where I would deliver it to S.

The soup bubbled away and all seemed right with the world.

Then, my universe unraveled.

Daughter #2, usually on top of things, remembered that she had a Colonial cooking project involving tapioca due the next day.  The  same thing had happened the week before and, though we had chosen Gingerbread, the easiest recipe, it had compromised the serenity of European Chicken Night.

We would have to embark on a tapioca procurement expedition later on.  No big deal.  I mixed the matzoh meal and the egg and set them in the refrigerator to rest, while I strained the soup.

On to math homework.  I have long since stopped being able to help my daughters with their math and when Jeff is away I am reminded how much I detest their discovery math curriculum and its textbooks that don’t actually show you how to solve the problems. A math freakout occurred over a problem involving a brownie pan.  Words were exchanged when I tried to help, so I encouraged Daughter #2, who is a fashionista, to pick out her outfit for school pictures the next day. Meanwhile, I rolled out the matzoh meal mix into balls and returned the chicken meat and fresh carrots to the soup stock.

Daughter #1, perhaps miffed at not being the center of attention, mentioned that her braces hurt, her ear hurt and wondered if she had to go to soccer practice. I set the matzoh balls into a pot of boiling water. 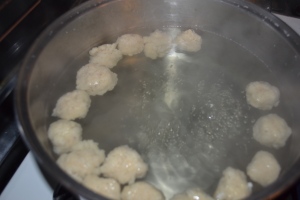 After modeling her school picture outfit and extracting a promise that I would iron it the next morning, Daughter #2 consulted the tapioca recipe, only to discover that it was supposed to soak overnight and cook for three hours. We were in for a lengthy evening.

Daughter #1 went to soccer practice.  At 6:00,  I poured a batch of the now-finished soup into a container for S, set it in a paper bag and carefully placed it in the car.  Daughter #2 and I set off to buy tapioca. By the time we got to the soccer field, S’s daughter had already been dropped off, so I made arrangements for our for our friend J, who was driving S’s daughter home, to stop by my house after practice to pick up the soup.

When we got home, Daughter #2 and I rushed out of the car, so she could quick-soak the tapioca, eat a bowl of soup, finish the math homework, take a shower and cook the tapioca, pretending Colonial people had the luxury of using the quick recipe on the back of the package.  Things were looking up.

I stepped onto the back porch to unlock the door.  The saturated paper bag gave way.

S’s soup container landed with a splat before bursting open, sending chicken, matzoh balls and any illusion that I had things under control flying.

Once the military precision of the evening gave way to chaos,my daughters rose to the occasion and things worked out nicely in the end.  I poured a new batch of soup for S and packed it in a plastic bag, cautioning J. and S’s daughter to handle it carefully.  The kids ate tapioca for dessert, which was easy on Daughter #1’s achy braces.  Daughter #2 figured out the math problem and wondered why her math book made things more complicated than they had to be.

I hope S. enjoyed her soup.

The next time I want to nurture a friend,  I think I’ll just rent the movie Bridesmaids for her instead.