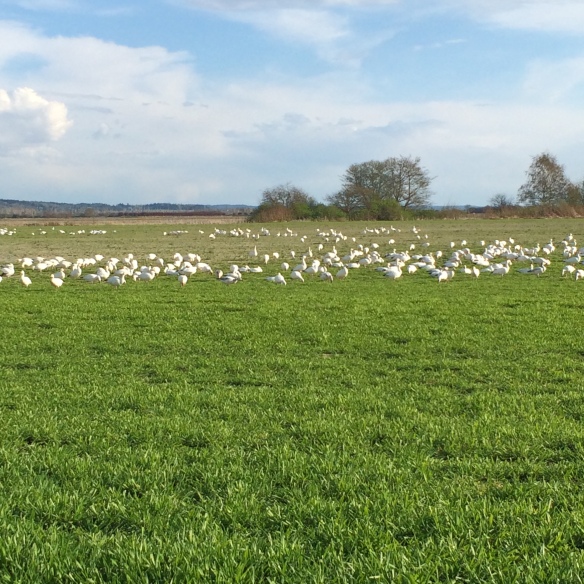 Snow geese in the Skagit Valley

April already? Before I go any further, I want you to know that I have fulfilled all but one of my New Year’s resolutions. I started and maintained a diet. I had a mammogram. I had a colonoscopy for Pete’s sake and, as icing on the cake, a CT scan and ultrasound to boot. And, I wrote my last installment of this blog on January 31, which is pretty much February, so technically two months, not three, have elapsed. But there’s no escaping the fact that I didn’t fulfill the resolution to write this blog once a month.

I didn’t think anyone but me had noticed, but then my friend Peggy said something. Peggy is one of those super-involved, super-organized people, who does a million things, including writing a weekly column for our neighborhood newspaper. Peggy is from New England. She’s one of those pull yourself up by your own bootstraps, no whining kind of people. Recently, Peggy successfully lobbied the producers of the David Letterman show to allow her 80 year-old mother a spot in the studio audience before Dave rides off into the sunset. Peggy started a new organization to combat the out-of-control development in our neighborhood. Peggy gets shit done. I have disappointed Peggy and for that I am truly sorry. 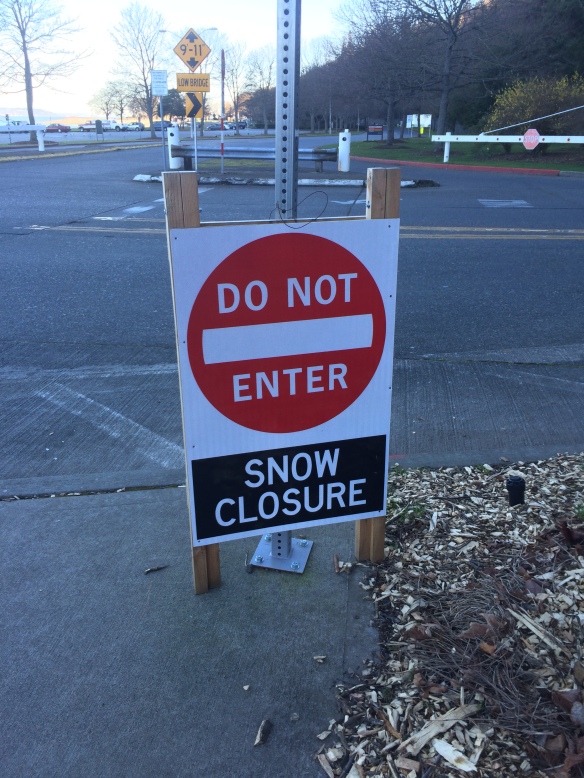 Seen on a dry, 60 degree Seattle day. Was Boston selling off its surplus signs?

In my defense, we have been living through what I think of as the winter of our discontent. This is not weather-related for, here in the Seattle area where we like to ski, this winter the big complaint was not enough snow, unlike the concerns of our friends back East.

Our discontent has been lifestyle-related — a knock-you-for-a-loop potential change that sent us scurrying to California contemplating a move.

In February, the principal of Daughter #2’s middle school, about to embark on a sabbatical, sent this quote from the philosopher Bertrand Russell out to families: “In all affairs, it’s a healthy thing now and then to hang a question mark on the things you have long taken for granted.”

Do a little sleuthing and you’ll discover that Bertrand Russell had a lot of provocative things to say. I suspect  (and have since confirmed) that Daughter #1 would appreciate this quote: “The time you enjoy wasting is not wasted time.” As the mother of two teenagers, I feel compelled to beg to differ. (And I highly recommend you read this evocative description of the sea change that happens when you raise teens.) 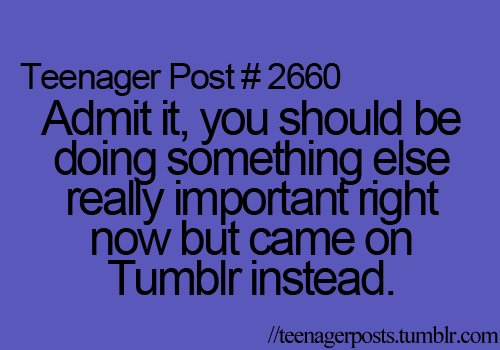 But the quote about not taking things for granted, well, we lived and breathed that quote. Jeff had a job offer in California. Our family pendulum swung from “there’s no way we’re moving” to “maybe we could have a better house and better weather (we hadn’t considered California’s drought) and escape all the Seattle construction and traffic.” The next thing you know, we were on a plane to check things out. It was, I might add, the day after my colonoscopy. I’d kept myself busy during the fasting and prep periods by researching real estate and schools. Jeff was incredulous that I would choose to have a colonoscopy during such a stressful time, but that’s how I roll. Not a lot of people would say this, but I can honestly say that the colonoscopy was the high point of my week.

During the White Food Diet I was required to follow prior to the fast and cleanse, I indulged in two items of note: French toast made with King’s Hawaiian Sweetbread — a family favorite introduced to us years ago by my mother after many sojourns visiting my brother and family at their Maui home — and labneh, basically strained Greek yoghurt which is great as a spread for pita bread, especially if you garnish it with za’atar and sumac. This after a few weeks of very controlled, mostly vegetarian, mostly Ottolenghi eating, which was my way of controlling my life, which seemed to be spiraling out of control.  “Mom is starving us,” my daughters complained to their father, who was out of town. “She only makes spicy rabbit food.” 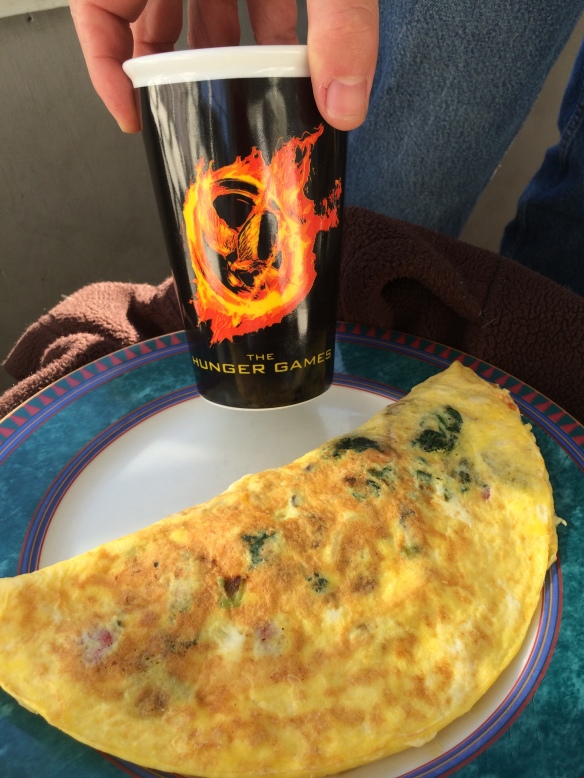 The post-colonoscopy meal washed down with a sense of humor.

And then, just like that it was over. The White Food Diet, the fast, the colonoscopy, the California possibility and winter. We came home, back to our lives, a few new condominiums that had sprung up across the street from us seemingly overnight, and to spring. 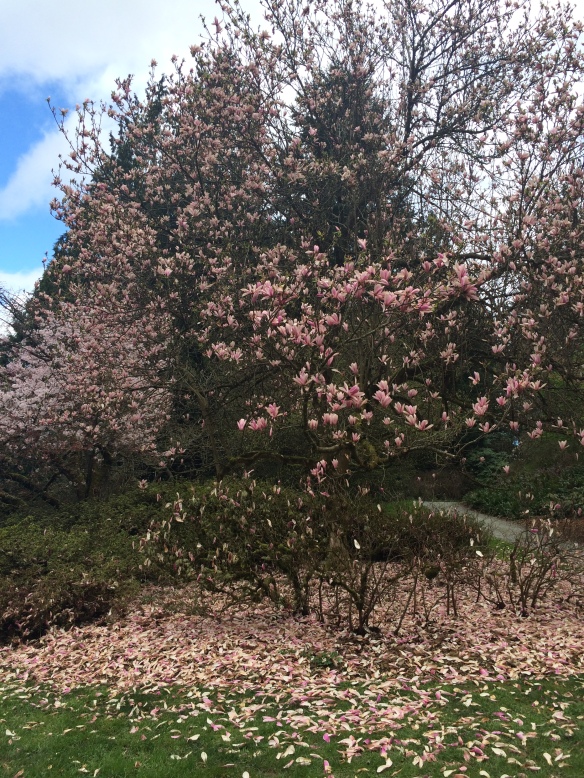 Though I appreciate it more now that I’m older, spring has always been my least favorite season. It confuses me and makes me nervous. Unlike summer, which has a devil-may- care feel to it, accompanied by margaritas and guacamole, spring has expectations that I don’t feel I can meet. It always takes me a while to find my footing in spring and this one has had many false starts.

That’s where the Corpse Reviver #2s come in. 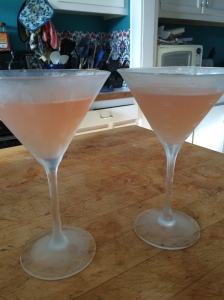 Jeff and I were introduced to them a little over a week ago, courtesy of our classy friends G and C, and they have given shape to spring. Last weekend, I whipped up some Corpse Revivers and I cooked, reveling in lemons and herbs and asparagus and fava beans and all of the lighter, sharper flavors that, like spring and the sunshine that comes with it, bring life into focus.

The snow is beginning to clear in the East, in our minds, in our lives.

Bertrand Russell spoke of his personal vision — to allow moments of insight to provide wisdom during mundane times. Spring is a little like that, providing a sneak peak of clarity just when you need it most. 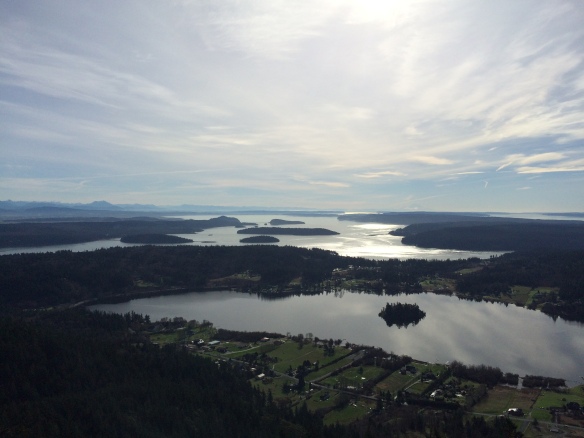 3 thoughts on “What would Bertrand Russell say?”