Whatever else you may feel about the current Presidential race, one of the more interesting aspects is where feminism fits in.

Many (but not all) diehard feminists (many, but not all of them older) support Hillary, pointing to her longstanding commitment to equity — not just for women, but for children, the poor, and the uninsured. Many (but not all) feminists (many, but not all of them younger) are uneasy with the once-idealistic Hillary’s questionable ethics and say they refuse to “vote with their vaginas.” They support Bernie Sanders, an unwavering idealist, one whose contemplative delivery reminds Daughter #1 of her grandfather.

It’s nice to have a reason to watch SNL again and even nicer to DVR it, so I don’t have to stay up late.

Last week, feminist elders Gloria Steinem and Madeleine Albright added fuel to the anti-Hillary fire, while Beyonce dominated the Super Bowl halftime show with her “take no prisoners” form of self-expression. The contrast in these feminist displays points to the generational differences in the way women experience feminism— fidelity to a movement vs. fidelity to oneself.

As a woman of a certain age, who fought my own feminist battles  (I’m a veteran of the days when women, but not men, had to take typing tests, no matter what job they applied for; was the first woman in my Foreign Service training class to wear pants; I suffered at the hands of unsupportive female bosses, whose attitude about balancing work and family was, “no one made it easy for me…;” and I have lived through the “Mommy Wars,” pitting working women against stay-at-home moms), this battle for feminist “street cred” bewilders me.

I now live in a household with an emerging  feminist and I’ve had interesting conversations with my daughters about the feminist issues that concern them: rape culture, dress codes, freedom of expression, to name a few. When they ask what feminism means to me, I say “equal opportunity and equal pay for equal work,” and then remind them that women still earn 75 cents to a man’s dollar, and we still don’t have paid family leave, subsidized childcare, and other reasonable practices that enable women to support themselves and raise families.

The continuum from idealism to pragmatism and the accommodations we make over a lifetime is something I had a chance to contemplate when an unusual package arrived in the mail: 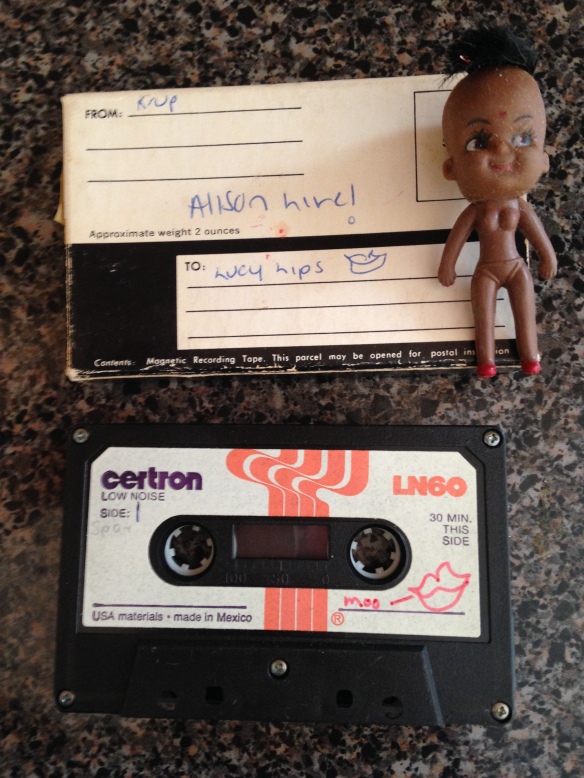 It contained cassette tapes I had made in 1978, as a 17-year-old exchange student at a French high school in Evian-les-Bains, France. Sent to me by my high school buddy, CC, whom I’ve only seen two or three times since high school, listening to them made for some entertaining rides in the minivan with my daughters, especially D #1, who just turned 17.

That’s right. My 17-year-old daughter got to hear from her 17-year-old mother. Back when I was a kid, that would have been fodder for an ABC after-school special.

Once we got past all the boring stuff (and the girls got done making fun of my hybrid New Jersey/Valley Girl accent), the meat of the tape had to do with my excitement and trepidation over traveling alone in Europe. I recount some “test runs” I took —weekend trips to Lausanne and Geneva, during which I fought off the unwanted advances of North African men, who had the impression that American women were “easy;” learned how to enjoy eating in a restaurant alone; and gained confidence navigating unfamiliar terrain in places where I did not fluently speak the local language. I drop hints about a longer solo trip I hoped to take, hitchhiking around Scandinavia.

My girls know the rest of the story:  I took that trip, which led to more trips, and an international relations degree, which led to me wearing pants at the Foreign Service Institute, where one seasoned female diplomat who spent her career in the Middle East, told us that in that region, she was treated like a third gender: “woman in pants.”

Now, as a 50-something career woman, who has seen ten 50-something friends (male and female) lose their jobs over the past year, and who worries how we will be able to afford to send D#1 to college and still have money left for retirement, my preoccupations have changed again. Greedy developers are razing the houses in my neighborhood and replacing them with expensive condos, yet we can’t afford to move anywhere else in the city I’ve called home for 20 years. My city is in the midst of an unprecedented economic boom, but we don’t have the infrastructure to support it, and longtime residents are being pushed out.

In the cacophony of commentary about the Presidential candidates, two recent pieces have stuck with me. One was Rachel Maddow’s reflections on what it feels like to be a liberal voter when no candidate has your back.  The other is a piece by David Brooks reflecting on Obama’s qualities of integrity, leadership, and humanity.

Maybe it’s because we’re the same age, but with Obama I never felt I had to make the difficult choice that many Democrat voters, myself included, are now grappling with. He had my back with his blend of idealism, optimism, and pragmatism. The fact that many are disappointed that he did not live up to his initial promise speaks volumes about our broken system of government and the costs of pragmatism.

After I discovered that my injured knee was actually the result of an IT band problem, some young women at work told me about foam rollers, cylindric torture devices that loosen tight muscles, which everyone below the age of 40 seems to know about. (Madeline Albright’s “special place in Hell” probably is well stocked with foam rollers). After a barre class (my new favorite exercise, which has a throwback feel to it), I gave one a spin.

Call it a stretch (no pun intended), but where would we be if Jane Fonda hadn’t popularized exercise, making working out and feeling the burn a part of many people’s daily routines?  Trailblazers deserve respect, as do the people and things that come after them.

Leg warmers are back!

I only listened to snippets of last night’s debate between Hillary Clinton and Bernie Sanders, because I was in my minivan on my way to volunteer at a school event. But what I heard was encouraging: a real discussion of the issues and the best way to deliver on promises.

I hope we can stop pitting women against each other and move away from making the contest between Hillary and Bernie a battle over feminism, because it should be so much more than that.

In laying out their plans for achieving economic equity and stability, and international peace and security, may the best candidate win.

I don’t have a recipe for you, but Daughters #1 & #2 and I are heading to Los Angeles, where I hope to participate in a food crawl, in between looking at colleges. Thanks to Lucky Peach, I’m itching to try Mapo Galbi. I’ll keep you posted.