” I have mountains to look at, stars at night to gaze at and it’s so dark that you can see every star in the sky. Also, the people here… everyone wants to help each other.”

“When I arrived here, nobody knew me. Nobody looked at me and associated anything besides the connotations of being American. It’s like someone just hit the ‘reset’ button on my life, and I get to build a name for myself from scratch again. It’s a great feeling to know that anything people think of me before they get to know me comes from questionable stereotypes and nothing else.”

“Best of all, we got to experience life under a philosophy that’s different from today’s norm. Rather than “keeping up with the Kardashians” and constantly working more in order to buy more, our hosts worked comfortably with what they had. As a result they’ve ended up with a beautiful home, two grounded and fun-loving sons, and best of all, the time to appreciate it. “

Three young men that I have known since birth are on extended forays in Afghanistan, France and New Zealand.  These sojourners — a soldier, a “sheap traveler” and a student — are sharing their impressions of the world, and their place in it, via Facebook and blogs.

(To be fair, the insights about appreciating what you have were written by the sheap traveler’s girlfriend and travel companion.  He’s lucky to be sharing his life and this adventure with such a grounded, healthy “shiny” young woman).

More than thirty years ago, I launched myself into the world.  There was no Internet back then, and therefore no Facebook and blogs, and the only way to share one’s impressions was via tissue paper- thin aerogrammes. It usually took two weeks for them to reach their destination and two additional weeks to receive a reply.

By the time the response arrived, you might have forgotten what had inspired you to write in the first place, having moved on to new experiences and corresponding new emotions.

I like this real time communication.  Yesterday I chatted on Facebook with my sweet, strong nephew A, who is serving in the Air Force in Afghanistan.  He regularly Skypes with his wife, parents, siblings, nieces and nephews and I imagine it is a great comfort to them to know that he feels safe and happy under the stars and that the previous night he shared a delicious meal with his Italian friends.  Rather than feel isolated, A can participate in home life and share the sweet mix of pumpkin patches, soccer games, doggy love and memories of good food with the people he loves.

I had to laugh when I read K’s accounts of student life in France.  Not much has changed since I attended a lycee in 1978.  His blog reminds me of the highs and lows I felt each day, as I, too, struggled with stereotypes and the reserve of the French students at my school.

I spent a second year attending college in France in the company of E’s parents.   Reading his stories of living and working in New Zealand on the cheap brings back memories of sleeping in parks and youth hostels, drinking inexpensive red wine and taking endless train trips throughout Europe.

E did a stint living and working in New York, so he’s experienced one version of “grown-up” life.  Now he’s seeing contrasting views of what a satisfying life can be. I can’t wait to find out what he decides for himself.

A few weeks ago, when the Canadians were here, Jeff pulled out his journals from his 1990 Everest trek.

That’s where he met S, aka “Cheesehead” (we’re not talking about Wisconsin here.  Jeff says this is the term used in Bellingham, Washington in the 1970s to describe Canadians who crossed the border in search of dairy products).

More than twenty years later, we laughed as Jeff read us his impressions of S and tales of their adventures together in Nepal.  Twenty years and two very different life paths, yet we marveled after the Canadians left, that Jeff and S still feel a sense of connection and of shared values, as well as a mutual acknowledgement that their international experiences  shaped the way they chose to live their lives.

I’ve been reliving my own first tentative steps into the world as I put the finishing touches on the cover and interior design of my book Ruminations from the Minivan, musings from a world grown large, then small, which should be out by the end of next month (stay tuned for details).

I know of what I speak when I tell these young men that their lives will be forever changed by their international forays.

“Kids, today,” one generation is fond of sighing about the next.

Judging from the tales from abroad I’ve been reading, I’d say, the kids are alright.  They are scaling mountains.  They are making informed choices about their values.  They are not sheep.

If my two daughters  explore the world and show as much insight, sensitivity and open-mindedness  as my three spiritual sons, I will have fulfilled my most important goal as a parent.  Their parents should be very proud of them.  I know I am.

There hasn’t been a whole lot of cooking going in in our house because we are still adjusting to a busier schedule.  One night, tired of quesadillas and pasta, I vowed to make the Garum Factory’s Roast Chicken with Muhammara, but was thwarted by a Justin Bieber-related incident that it took most of the night to resolve (this time it’s personal, Bieber!).  A few nights later I did make that blissful chicken and the night after that, I used the stock I’d made from the chicken carcass to make one of my favorite standby soups, Ezogelin Corbasi, Turkish Red Lentil, Bulgur and Mint Soup.  Recipes for this soup abound. I used the recipe from Turquoise, Greg and Lucy Malouf’s beautiful book about their culinary travels in Turkey.  Here’s a link to the recipe.

You can find some additional fabulous Greg Malouf recipes here. 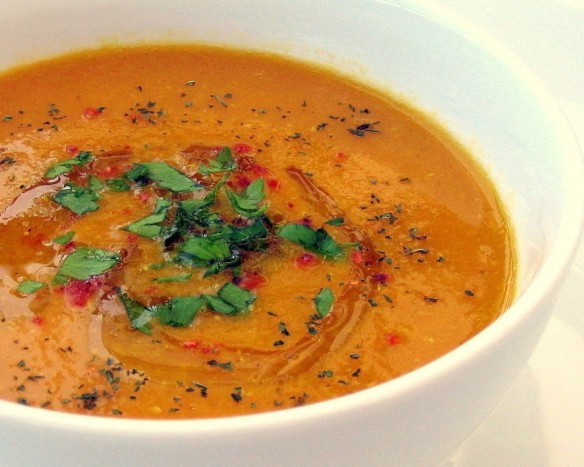 Lentils are one of those ancient foods that provide sustenance all around the world.  May these young men continue to find sustenance and broadened perspectives  through the people they meet and the meals they share.

7 thoughts on “My Three Sons”